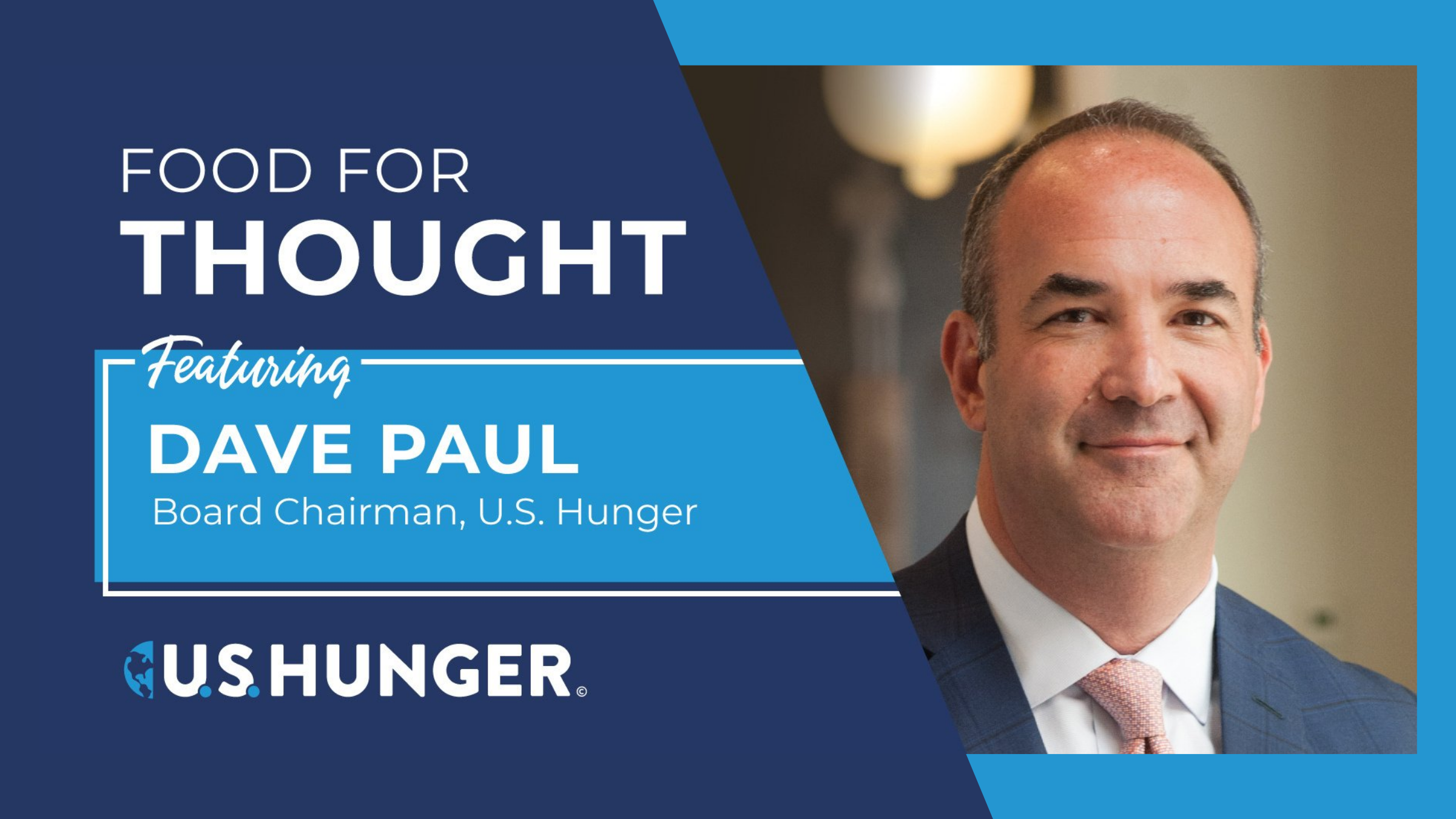 Food for Thought is a quick chat with some of our amazing partners in the fight against hunger. Hear from the Chairman of our Board, Dave Paul about what our mission means to him, why he chose to serve with U.S. Hunger, and more on nonprofit leadership.

Dave Paul is a lawyer at Paul Knopf Bigger in Central Florida who graduated from Stetson University College of Law with Honors. Dave joined our board at U.S. Hunger in 2020 and now serves as the board chair. As an attorney, David is known for being passionate, committed, and detail-oriented. As a person, he is most proud of his family. He is a committed husband (to his high school girlfriend) and proud father of three children.

Why did you choose to serve on U.S. Hunger’s board and is there anything specific about the mission that’s really important to you?

Initially, if I’m 100% candid, it was 100% because I believed in you. You were willing to leave a good job, where you were on a great career trajectory with the things that came along with the position you had, in order to step into the nonprofit world. And knowing your faith, commitment, and who you are as a person, I felt led to just help in whatever way I could. But over time I really became persuaded.

It has become less about Rick Whitted for me, and more about seeing impact, opportunity, innovation, and what ultimately has kept me on the board and led me to serve more deeply are really two things. One is the heartbeat of the people that have chosen to be a part of U.S. Hunger (Formerly Feeding Children Everywhere). There is a heartbeat that I like being around. I like being around a tender heart and a heart that cares about people. I like being around that and being a part of it. But also I’m excited about innovation, opportunity, and stimulation, and if it’s directed in an impactful area. Right now, I just think that I got lucky to really be engaging with the organization in a time where there was going to, by necessity, have to be innovation, creativity, and progress. So I’ve stayed for the heart and also the progressive movement to innovate and make an impact.

We woke up at the end of February last year, the eve of the pandemic, and 90% of our income was gone. We have survived since that time, and the pivot that folks are looking at is that we have become a nonprofit technology organization with a software as a service platform that can benefit others.

I would love for you to share, as the chairman of the board, what that experience was like and how has that journey been for you?

Personally and initially, there’s a lot of fear just because you think of every person that has been part of the organization and the people that have invested in it years before I ever even was part of U.S. Hunger. There are people that, not literally but figuratively, gave their lives and committed to try to impact feeding people internationally and locally. There’s a lot of pressure to honor everything that went before you so for me there was a lot of fear. Over time, what I have seen is that it has forced clarity beginning with the mission, because there were all these potential opportunities.

I believe the pivot point of that entire season was when, because of COVID, we could not do hunger events. So the entire strategy for feeding people had been impacted. But I remember when we all got together, we spent time trying to clarify the mission and vision, just to get clarity on what we are called to do. I really believe that pivot point has given me personally a lot of peace because we realized we’re not only trying to feed people, which had been the traditional model, but we’re also trying to unite people for a healthier tomorrow. It really helped a lot of that fear, because then it gave us something to take every opportunity and, at least for me as board director, to just be sure that the strategies we were enacting, whether it’s software as a service or it’s the move to fresh produce with Full Cart, ultimately we’re 100% consistent with the vision and the mission of the organization. I believe that moment of clarity brought a lot of peace for me because it defined direction.

Healthy outcomes are always the goal and when you look at how our organization has pivoted and is evolving, it really has gone in that direction. Our Hunger Projects and Full Cart program are about making sure people are fed, but we’re also using data, analytics, and the voice and power of the person who’s saying they need the help, to unite to healthier outcomes.

I think as a leader of this organization, the board really challenged me for clarity, and not being afraid to challenge uncomfortably, really set in place a strategy for the business that’s critical in times like this when everything is so uncertain.

A lot of it is because the heart piece was going to be there no matter what. But what innovation, creative strategy, and clarity have done is that it’s taken something that would be worthy and added to that heart piece. If the only piece was we’re gonna feed people today, that’s worth my time, your time, it’s worth money, everything, and it’s worth it all. But if you add to that, we’re also trying to do something even bigger and long-term than that. It’s exciting!

If you had to speak to two or three things that were key for an organization, a leader, or an individual seeking that, what would you say is your guide to bringing clarity to one’s life, mission, purpose, career, or business?

I think it first begins with listening. Really listening to ourselves is part of it. I believe that in most of our meetings when I ask you a question and you get to clarity at the end, you already have it. All I’m doing is giving an opportunity and a moment for you to listen to yourself. I think it’s also being around a team (that goes for business, family, non-profits, or churches) that has an environment where you can actually listen is the first step. And then I think the second is recognizing that most of the time, it really does take time to get clarity, but you’re rarely going to have certainty. Certainty and clarity are not the same thing. Clarity is what I need to do because it seems clear, but you’re not certain it’s going to work out.

Talk to us a little bit about how you see our organization making the most impact in the future.

I think the number one thing is oddly not in innovation, as much as I’m drawn to that and I believe it’s going to be impactful. I think it is bringing out the reality of a culture that is engaging people to collaborate together. When I think of what a lasting footprint is, I really believe it’s going to be not having this traditional model where people that are trying to solve and address problems are all siloed up, and they’re afraid to partner with another organization because of: “How are they going to get funding?” or “What are they going to do?”. My belief is the biggest impact is changing how collaboration happens in addressing issues of hunger and health. Because years ago, who could have ever thought of a health insurance company partnering with U.S. Hunger and it is 100% consistent with the mission to feed families today, people that need food and are hunger insecure. So we wouldn’t have thought that would happen through health insurance. But we’re in such an evolving climate and the world’s changing so fast, I believe that it’s going to be in the collaboration piece.

I also think there’s a piece of breaking some of the barriers that people have when they look at non-profits. By that, I mean most people are not looking at non-profits to change technology and how people are seeing technology. They don’t think of it that way and my hope is that, in the way that we’re trying to both operationalize and make dignity such a part of that, we’re literally like a research and development test case for how you can have technological advances that actually increase dignity.

David, thank you so much first for being a part of today’s conversation and investing time into this mission and this call. You are a great friend of U.S. Hunger, you’re an even greater friend to the fight against hunger and we appreciate that.

*This interview has been edited for length and clarity.